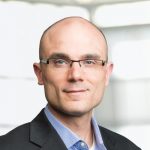 Dr. Paul Schaffer graduated from the University of British Columbia in 1998 with a BSc in chemistry and biochemistry. From there he began his MSc in chemistry at McMaster University and transferred directly in the Ph.D. program two years later. His doctoral work focused on the design and synthesis of technetium and rhenium chelates as potential new radioimaging or radiotherapy agents. After successfully completing his doctoral thesis in 2003, Dr. Schaffer stayed at McMaster for a brief period of post doctoral work and then settled as a Research Scientist at the McMaster Nuclear Reactor (MNR). In this role, Dr. Schaffer was responsible for demonstrating medical applications for isotopes produced at MNR. In 2006, Dr. Schaffer entered the private sector as a Lead Scientist at General Electric Global Research in upstate NY. There, he was responsible for developing novel radiotracers for GE Healthcare. In the latter half of 2009, Dr. Schaffer returned to Canada to accept his new role as Deputy Head, and is now Head of the Life Sciences program at TRIUMF. He is responsible for maintaining TRIUMF’s medical isotope and radiotracer production programs in support of neurological and oncology research. He also leads a research program geared toward developing novel radiopharmaceutical compounds for imaging and diagnosis of disease.

In response to the 2007-2009 99mTc supply crises, Dr. Schaffer and his collaborators spearheaded a successful effort to establish proof of concept commercial-scale, non-reactor production of 99mTc. This effort saw four institutions come together with funding from Natural Resources Canada (NRCan) to demonstrate direct production of this isotope using Canada’s existing medical cyclotron infrastructure. Dr. Schaffer is currently serving as founding CEO of ARTMS Products, Inc., a spin-off company looking to commercialize the technology developed through the NRCan-funded initiative. Under his direction, ARTMS was chosen as the winner of ‘Most Promising Pre-Commercial Technology’ at the 2017 BC Tech’s Technology Impact Awards.

For his leadership efforts, Dr. Schaffer was recognized by Business in Vancouver as one of British Columbia’s 2013 Top Forty under 40 individuals; recognizing him as an effective researcher with an ability to create teams that produce high-impact results on short time scales. The NRCan-ITAP team was also recently awarded the 2015 NSERC Brockhouse Prize for Interdisciplinary Research.

Dr. Schaffer continues to re-define the TRIUMF Life Sciences program by focusing on its core competencies to deliver specific outcomes, and continues to connect the TRIUMF program with industrial and commercial interests. Dr. Schaffer is a leader, an entrepreneur and one of British Columbia’s most promising talents.