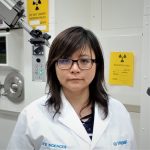 Qing Miao is currently working as PET Radiopharmaceutical Development & Production Supervisor in Life Sciences Division of TRIUMF. She earned her Master’s Degree at Lanzhou University, China, and her PhD in Organic Chemistry from the University of British Columbia in 2010. After completing her PhD, she worked as a Postdoctoral Fellow in Biomedical Research Center in UBC to study paracetamol induced global proteome changes in platelets. In 2012, Qing joined TRIUMF initially as a Postdoctoral Fellow working on antisense PET imaging of mRNA using radiolabeled CPP-PNA radiopharmaceuticals. Later, she started working on the development of new C-11 brain tracers for Pacific Parkinson Research Centre. She started in 2017 to oversee the radiopharmaceutical production program, which includes both the synthesis of established routine tracers as well as the implementation of new radiotracers used by TRIUMF and its partners.